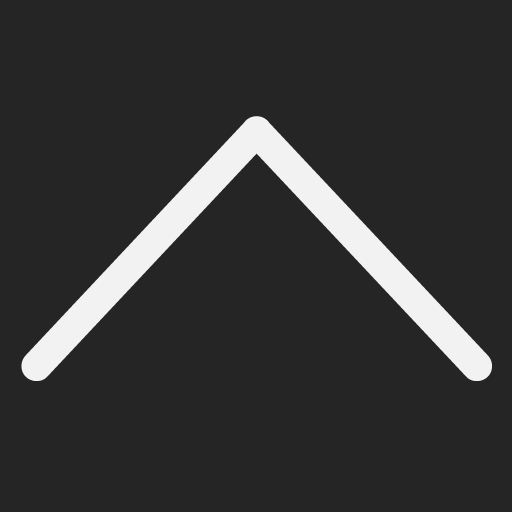 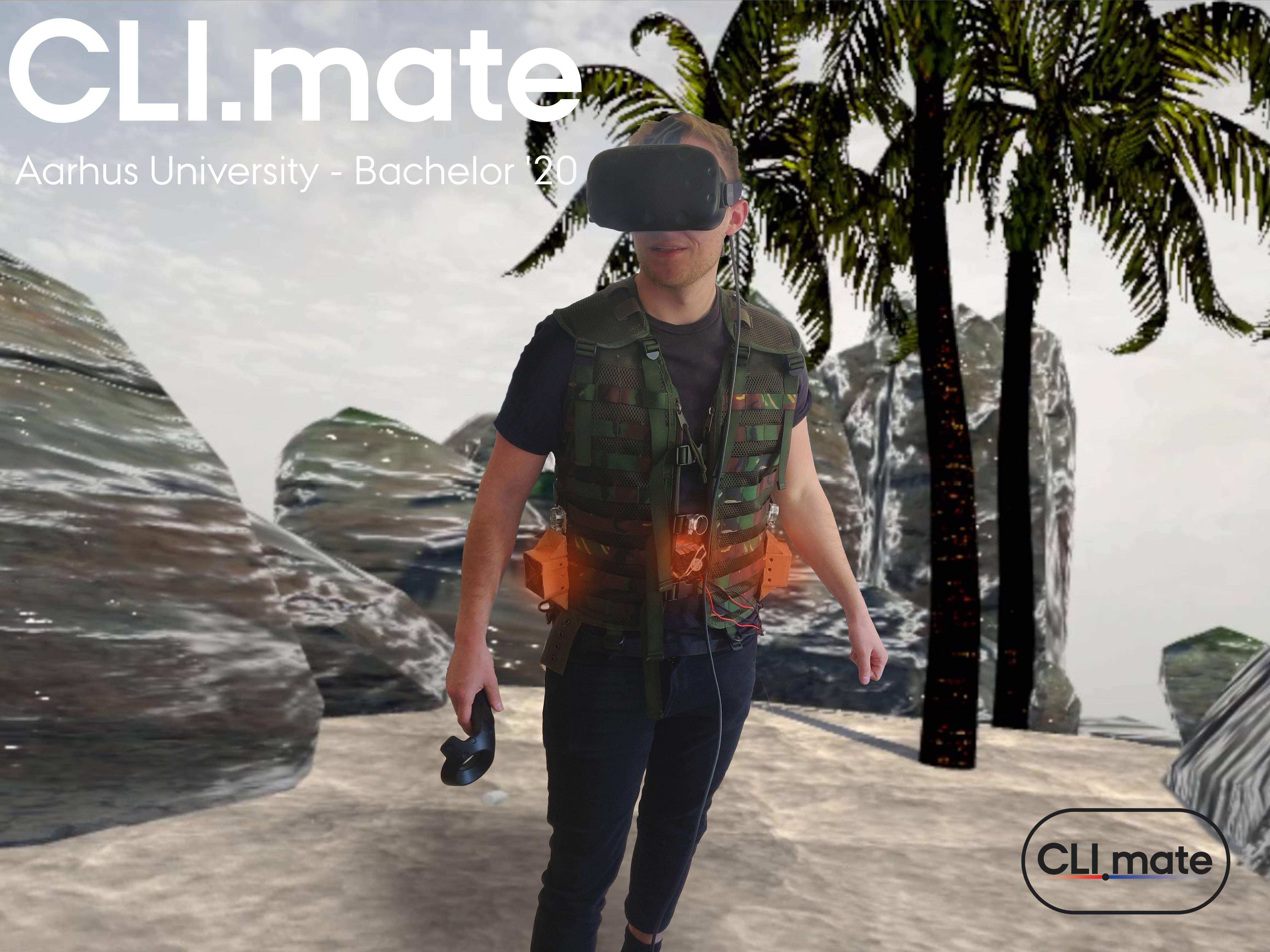 This project was implemented during the Covid-19 outbreak, but because of good planning, intelligent teamwork and great supervision, we were able to finish our project (almost) without having the pandemic affect the outcome. We both received a 12 (A) for CLI.mate.

3D Visualization and VR with Velas

After working with Velas in my fourth semester, I went back to work with the Architect in their building department. Here, I functioned as an IT consultant and gave a short course on how to display and present 3D-models (houses, in this case) in both digital and tangible ways.

We started out by 3D-printing different rooms in a house, to have the customer “build” their own house and give them a completely new perspective of the development process.
We also worked with VR and AR. Here, we made use of the software, Kubity, that can provide an AR overview of 3D-models, but can also display models in VR. VR was tested using company engraved Google Cardboard headsets, and this gave the customer the ability to traverse through their house before any construction whatsoever.

During my fifth semester, I applied for the position of Teaching Assistant (TA) and got the position. The course I would be assisting was called Physical Computing. When I had the course myself, I built a Robotic Hand. Not only did I get to work with an incredible teaching staff, but I also had the privilege to be a part of a multitude of interesting projects. 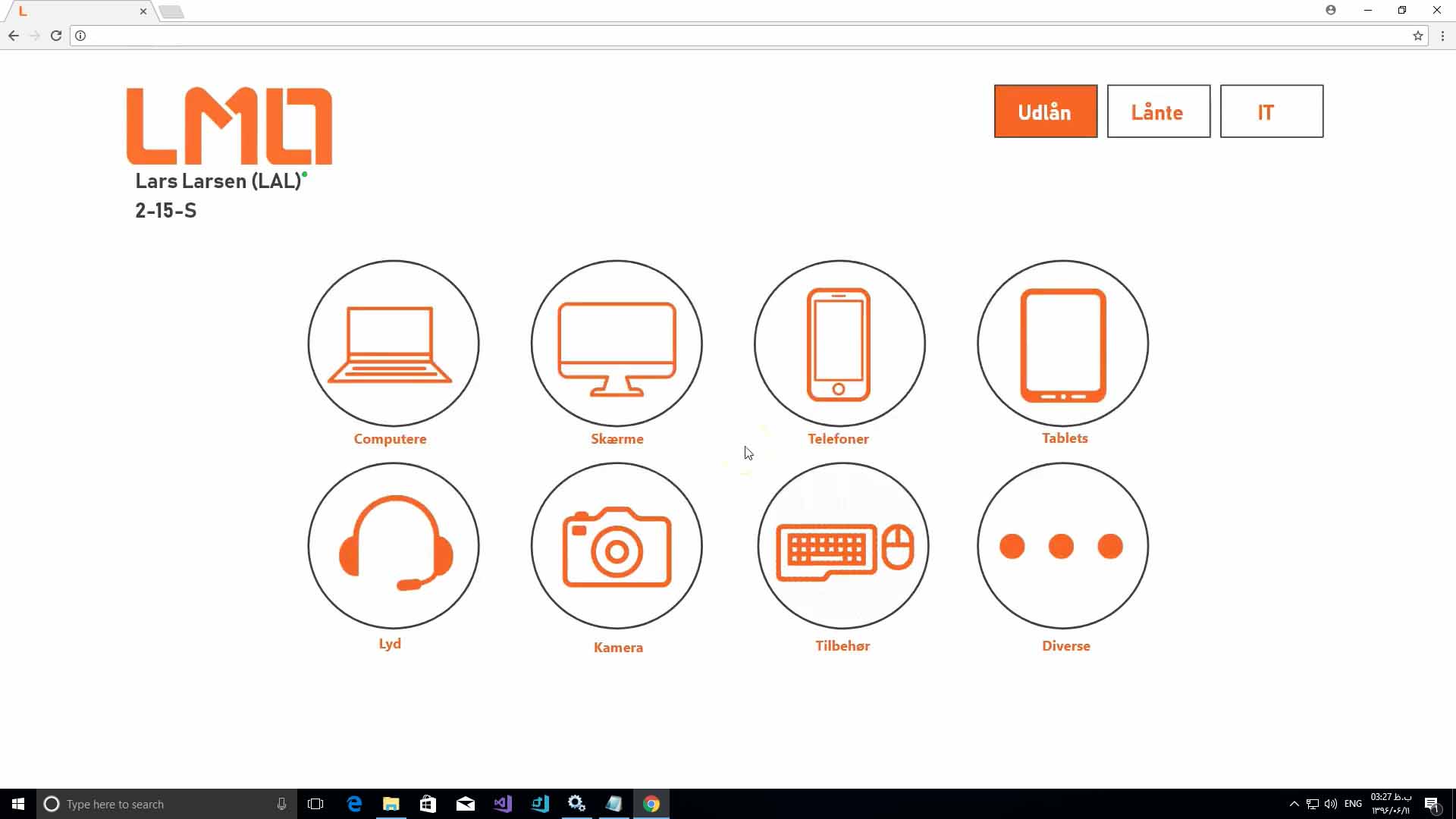 LMO Udlån was developed during a course called Experimental System Development. The point of the course was to develop a system for a user/customer, by working closely together with them. We were instructed to go and find these users ourselves (private/public companies, public institutions etc.) and we found Velas (who, at the time, was called LMO). Velas is Denmark’s leading consulting company in agriculture, and we were able to work together with their Receptionist, IT department and Architect. The system we developed would improve the lending of components within the office. During our talks, we found that they had a bit of trouble keeping track of their gadgets, so we composed an easy-to-use system that would make it easier to get in touch with the IT department, and would also do a better job of keeping track of any components which the employees had lent.

During the interviews of the Architect, I found different ways to further the presentations of the houses designed and created by the Architect. I would later return to Velas and expand on my findings.

For this project, I created a robotic hand with another student. The hand is stationary but is controlled remotely with a glove. The goal of this project was to improve our skills with circuit design and development, and also to get a general idea of multimodal interaction.
The robotic hand is 3D-printed in different parts, and then put together to create the final product. The hand is mounted on a wooden case that contains four servo motors. These motors tug strings that bend the fingers. The motors are controlled wirelessly (using radio), by a glove. The glove uses flex sensors to sense the finger bending and movements. 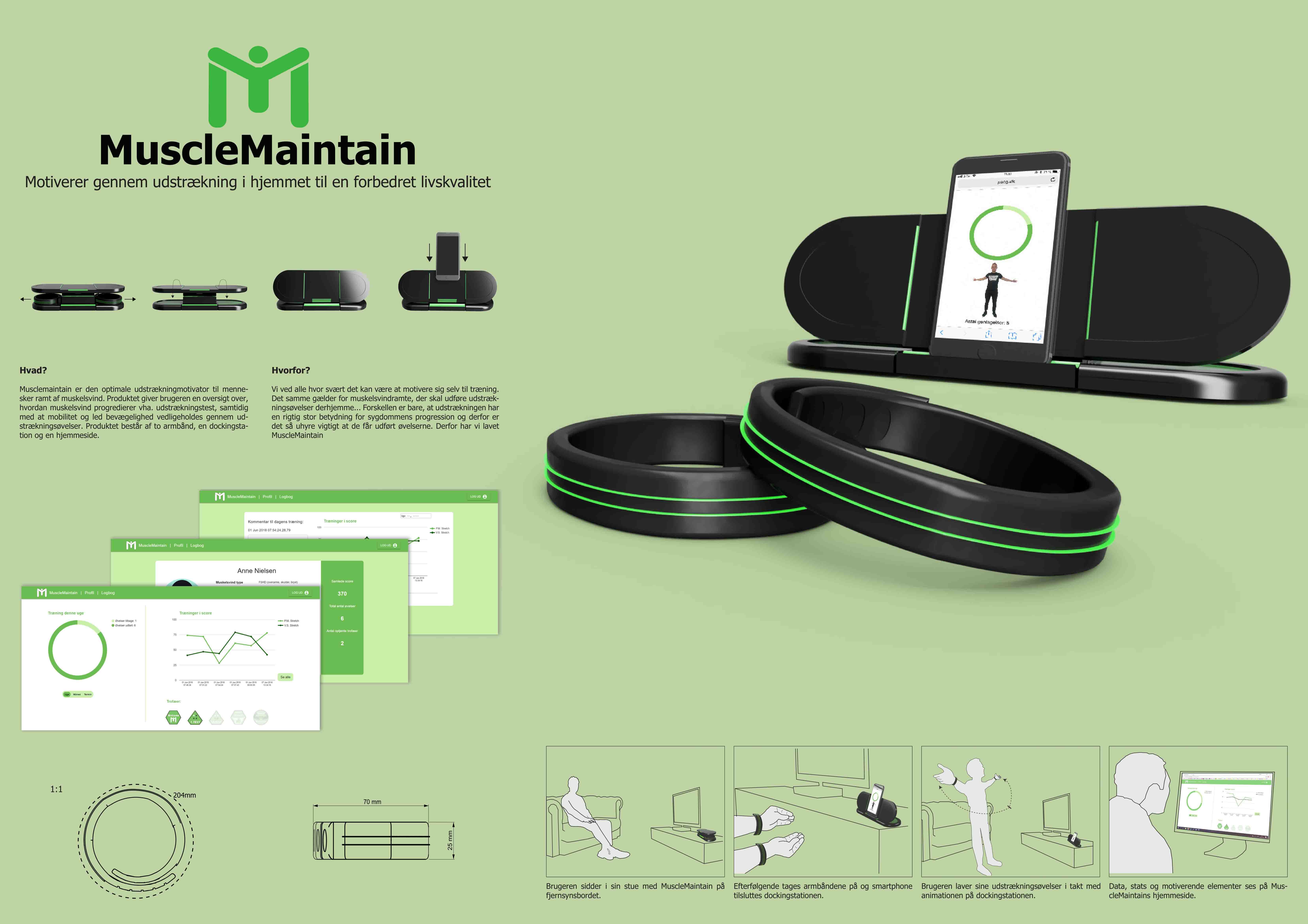 Throughout my entire second semester, I worked on a big project with three other students. We were given an assignment about Assistive Technologies, where we would pick a mental or a physical disability to work with. We chose to work with people who suffered from Muscular Dystrophy, in the hope that we could help make a small change. We talked with a lot of people who either had Muscular Dystrophy or worked with people who had it. We had brain storming sessions and analyzed a lot of interesting data, but in the end, we came up with MuscleMaintain. MuscleMaintain is a wrist band you can wear to stretch out your muscles, while a docking station (optionally) shows you how to perform the exercise. MuscleMaintain also has a website where a user can track their progress and get rewards for good exercise. We made short video that showed off the design, as well as a poster.

As part of the exam, all the students were to show off their projects at a fair. This fair was hosted at the Institute of Computer Science in Aarhus, and everyone had a prototype to display. This post contains a picture of me showing the functionality of the wrist band. We also made a video where the prototype is used by one of the members of the group.

Web of Things was an IoT-course I had on my second semester, where we worked with webpages, JavaScript, web hosting, databases and I/O signaling. The picture shown here, is an early draft of a proposed webpage for a later project I also worked on at my second semester. This page had an SQL-database where members and blog posts were updated and manipulated by the user.
During this course, we also set up a crude weather station that was hosted with a Raspberry Pi and programmer in JavaScript. This weather station would read the current temperature and humidity in a room and store these values in a database. The station also hosted a webserver where the data could be read in a linear graph. 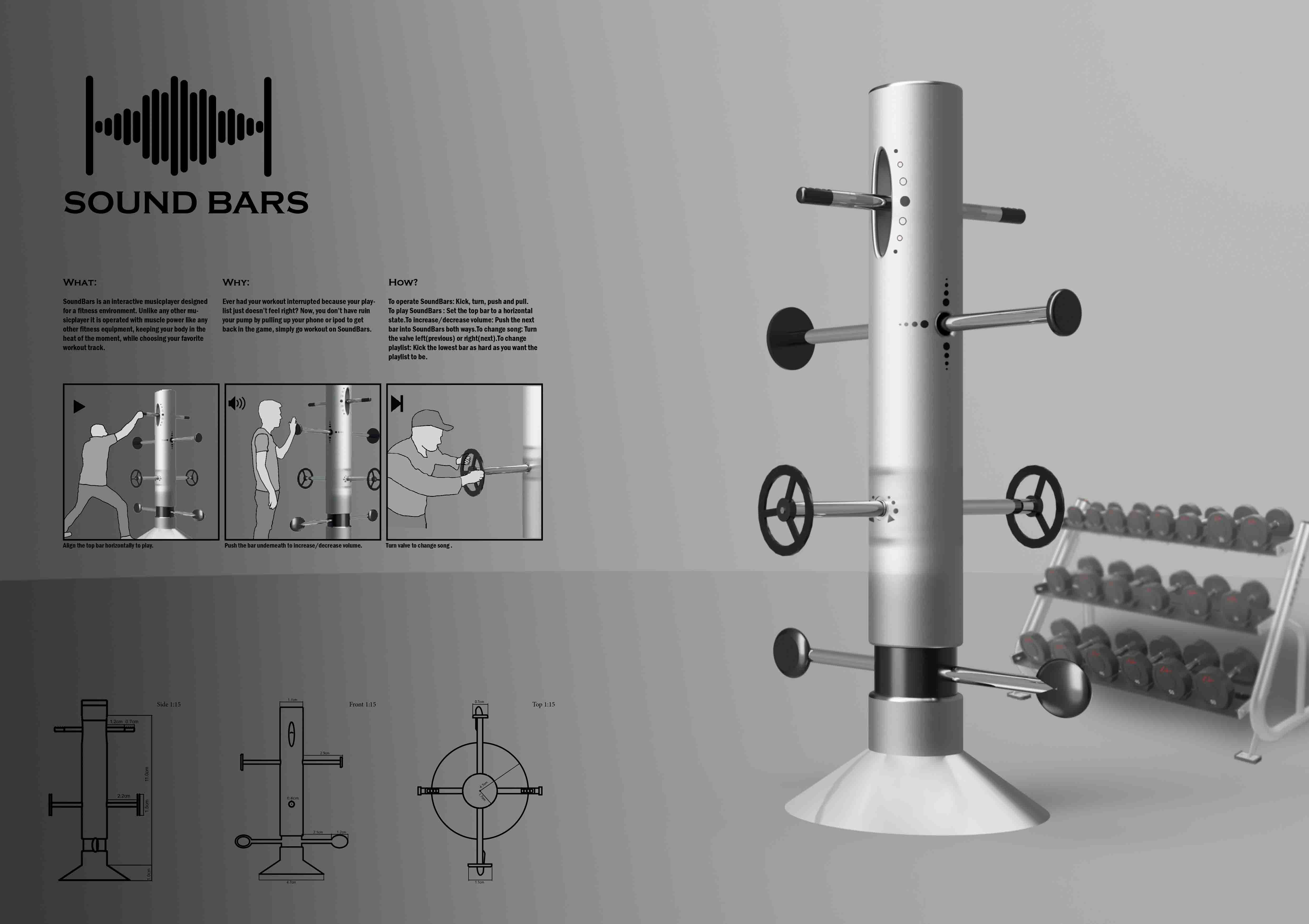 SoundBars was the first project I co-created at Aarhus University. I, along with another student, were given the assignment to create a music player that would fit into a gym/workout environment. After brain storming, body storming and creating various models, we developed this idea using an iterative design process. The final product was a tall cylinder with vertical bars that could be tugged, pushed, spun and kicked in order to play/pause, set volume, change song or change the tempo of the music. We developed a working prototype that we showcased at our exam during the product pitch.